Hey all,
So Apoligies for not getting the updates up sooner *insert usual reasons here* but here are all the latest updates that we have been reciving from your fellow HBA members.

* Brandon at "Big Daddy Reviews" has interviews with Tammi Sutton director of "Sutures", Jacob Knapp director of "Down With The Boogey" and Wayne Henrique director of "Attack of the Killer Turds"

* Chris over at "The Unflinching Eye" is doing a series of posts on David Cronenberg called the Interzone Dispatches. The Dispatches will focus on various aspects of his work, approaching it from a (hopefully) slightly different angle. I'll be looking at recent Cronenbergian influences on the arts; some of his most rare directorial efforts, including some of his 70's genre TV work (from the same period as SHIVERS); and what the Canadian master of body horror and brain-bending philosophy has in store for us in the future!

Wow, do we have a crazy amount of new blogs added to the HBA this time around! To be honest, we have been slacking here at HBA headquarters…Carl's in for his sex change reversal surgery (dude just can't make up his mind), and I have been constantly fighting off hordes of women, slaying dragons and stopping the oil leak, but that's nothing new I suppose.
Anyways, check out all of these fantastic new additions to the HBA, and if for some reason you were missed, please leave a comment or shoot us an email at horrorbloggeralliance (@) hotmail (.) com and all will be fixed.
Guts and Grog Reviews

The Roads of Autumn Dusk

Memoirs Of A Scream Queen. I Am JennyB

The Sky Has Fallen

The Deadly Indie Drive In

The Girl Who Loves Horror

A Southern Life in Scandalous Times

A Leaf On A Windy Day

Check out the NEW The Day After Gallery 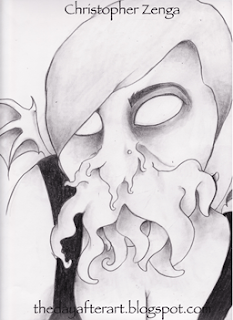 I have officially launched my new line of custom portraits. Cthu-You, become the Cthulhu monster! Check out this portrait of BJ-C from Day of the Woman, She was awesome enough to pose for me for a THIRD portrait and she also did a real nice write up of yours truly over at Day of the Woman

For you very own Cthu-You custom portrait, drop me a line at

Be sure to check out these scary new blog-additions to the HBA:

Posted by Maynard Morrissey No comments:

The HBA Takes A Stab At: Predators! 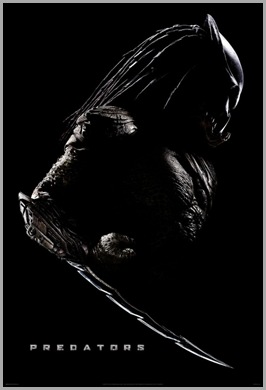 Unless you have been living in the jungle, covered in mud with only the whites of your eyes showing, there is a new movie coming out this weekend that is sure to get a few horror fans up and out to the theaters. Of course I am talking about Predators! This is one of the biggest and most promising theatrical genre release this year, and to see the dreaded hunter make it back to screens in its own film is exciting, only made better with the the whole plural thing. You know the deal, if you see Predators and write a review, leave a link in the comments section, or send it in to horrorbloggeralliance @ hotmail.com, and we will post the link hear for all the HBA members to see.

From Midnight, With Love: Predators

Be sure to check out these great new additions to the HBA:

Before you go out and watch people blows their hands off in a bloody 4th of Ghouly extravaganza, check out these great new articles that have been submitted by your fellow HBA members over the past two weeks:

365 Horror Movie has run through their list of the Top 50 Horror Movies of all time, check out what made the cut HERE to voice in on your favorites!!

Big Daddy Horror Reviews had the chance to interview Horror favorite Kelli Maroney just recently, so be sure to head on over to see what the star of Night of the Comet and Chopping Mall has been up to HERE!!

Shaun Anderson, author of The Celluloid Highway, has begun a month long tribute to Bavarian filmmaker Werner Herzog, with three posts up now which can be found HERE!!

Liam Underwood has begun a bold undertaking in a new overview of the six Leprechaun movies, which have been given far too much thought and consideration by his own accord HERE!!

The unlikely slasher villain's journey through all six films has been traced, from his roots in the first Leprechaun movie to his frankly fantastic excursion to space, and then his frollicks in the hood. And if the little Irish tyke isn't enough to tempt you over, there's also boobs. What's not to like?!

Michael from Watching Hammer has also brought an important piece of Horror news to everyone's attention this week, please be sure to read on below and do your part to save Hammer Horror's Bray Studios:

As some may be aware, Bray Studios in England are in danger of closure and demolition to make way for housing. This would amount to the destruction of an important part of British film and cultural history. Bray was home to Hammer Films for many years (where iconic productions like The Curse of Frankenstein, Dracula and The Mummy were filmed) and subsequently was used in the production of many other films (including the Rocky Horror Picture Show and the model work for Alien) and TV programmes (including Space 1999 and Dr Who). The Save Bray Studios campaign, organised by Hammer expert Robert Simpson, is trying to raise awareness of this imminent threat and encourage others to do likewise. As such, if you love classic and horror cinema please consider taking part in the following, and inform others of it:

The Watching Hammer blog (http://watchinghammer.blogspot.com/) would like to propose next week (Sun - Sun) as a week of "Blog on Bray Days".

Please take part and choose a day next week as your "Blog on Bray Day" to write a post on Bray Studios, the place they hold in cinema history, the danger they currently face, and what people can do, including relevant links.

Post urls can be emailed to Watching Hammer which will collate them as links.

Thank you very much, and please do take part!

The Shell Hawk has another great giveaway going on this week Horror fans! Readers can win a hanging pumpkin pots plus extra goodies for every 10 comments of the "I want one" variety. Details can be found HERE!!

Cortez from the illustrious Planet of Terror is calling on you, Horror bloggers:

We are looking for some more horror blogs to feature on our weekly series 'Meet the Horror Bloggers.' Basically, its a feature spotlighting horror blogs (it can be anything related to horror: reviews, news, general in theme, books, pop culture, etc.).
Please spread the word and direct all those interested to email me at jcorty28@gmail.com
----------------------------

Slammed and Damned has found god's gift to Twilight haters in The Mis-Adventures of McT & A: The Twilight Spoof! Head on over HERE for the low down!!

That wraps everything up for this week, thanks again for taking to time to see what is going on around the Horror web and have a great week!

Celebrate your Horror Independence Day by checking out the newest additions to the HBA: