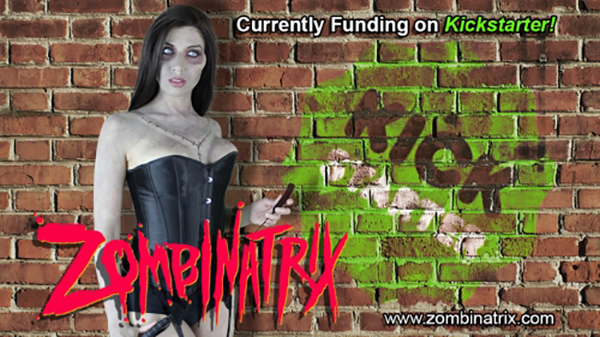 
Hello, Bianca Allaine here again! Just a note, we will not be sending emails to you this frequently, but we wanted you to be the first to know that the Kickstarter Fundraiser campaign for ZOMBINATRIX is now live!

Michael and I have spent months planning and preparing for this campaign, working around the clock to bring you something very special. Make sure you check out our pitch video which is more of a fun, informative short film.

The official URL for the Kickstarter page is https://www.kickstarter.com/projects/zombinatrix/zombinatrix-shes-into-whips-and-brains-zombie-horr but www.Zombinatrix.com will redirect you the campaign as well! Also, don't forget to follow our campaign on social media for updates and please help spread the word with your friends. Also, if you're a blogger, podcaster, etc., we'd love for you to help promote the film and campaign!

The rewards and donation tiers range from $5 to $5 thousand dollars. We're running an early bird special for producer perks. Please note, these early bird perks are limited in both time and quantity.

Some additional rewards we will have available are listed below. Please be aware that some perks are limited. If we surpass our goal of $10,000, we will add surprises and cool new rewards! Thank you again for your support and please contact me if you have any questions. Together, we're going to make an awesome movie!

Posted by Jeremy [Retro] No comments:

October 1st marks the 50th anniversary of George A. Romero’s Night of the Living Dead 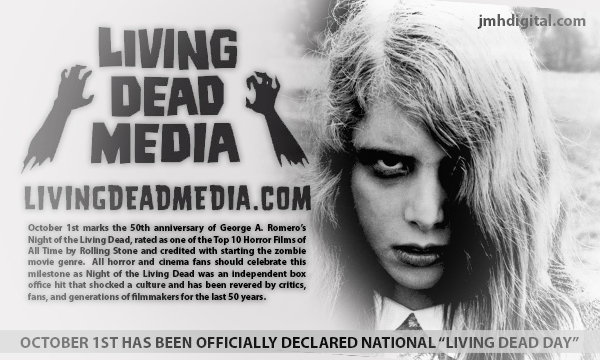 October 1st marks the 50th anniversary of George A. Romero’s Night of the Living Dead, rated as one of the Top 10 Horror Films of All Time by Rolling Stone and credited with starting the zombie movie genre.  All horror and cinema fans should celebrate this milestone as Night of the Living Dead was an independent box office hit that shocked a culture and has been revered by critics, fans, and generations of filmmakers for the last 50 years.

Rightly so, October 1st has been officially declared national “Living Dead Day” by Chase’s Calendar of Events, the most comprehensive and authoritative reference available on holidays, special events, and more.

In celebration, you have two opportunities to see this remastered classic:

Oct 6th: Exclusive Screening of Night of the Living Dead with the filmmakers, cast and crew in Pittsburgh at the historic Byham Theater (where it first premiered 50 years ago)
Cast In Attendance: Judith O'Dea, Marilyn Eastman, Judith Ridley, Kyra Schon, Russ Streiner, John A. Russo, Charles Craig, and Richard Ricci

Tickets are available on Pledge Music

Tickets are available on Fathom Events

For all the details and remember to look at the "KICKSTARTER" page
visit: www.nightofthelivingdead.com