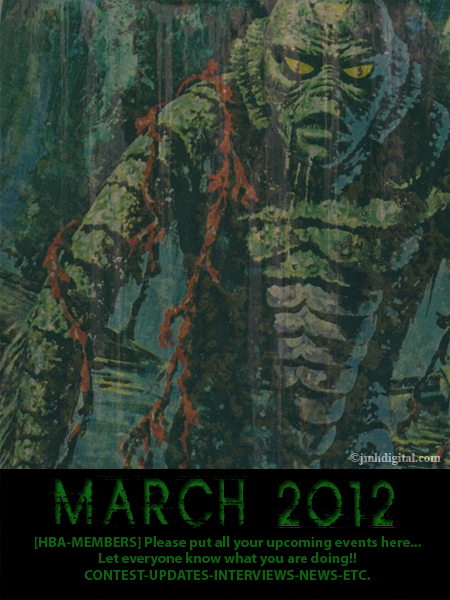 March should prove to be an interesting month at Random Reviews Incorporated. I'll be posting reviews of the following flicks (list subject to change)...

Remember, the site is updated DAILY with all kinds of geeky content (I also cover metal for the music lovers out there and wrestling for the wrasslin' lovers out there).

Got a new giveaway going on right now at The Moon is a Dead World.

The prize is Dusk Vols. 1 & 2, and to enter, simply head on over to http://www.facebook.com/themoonisadeadworld and Like the page. Simple!

I'll have a review of the DVD double feature Katarina's Nightmare Theater with The Devil's Men and Terror, news on DVD releases like The Burning Moon and a post on movies with women undercover as strippers/hookers.

This month, I concentrate on the darkside of Sci-Fi.

1. The Worst Jobs in Horror and Sci-Fi (The things horror and sci-fi characters do to make a buck)

2. A Clockwork Orange--An analysis of the novel, and the film.

3. A Sci-Fi Atlas--real places in the cosmos, that are the setting of famed sci-fi works.

All that, and more, on The Nightmare Fuel Podcast!

I will be interviewing Jonathan Maberry on Sunday, March 4 as part of his Dead of Night Shambling Zombie Blog Tour.

For almost 2 months now every Friday I do a poster illustration from some of my favourite films at the all new and dynamic slashthezombie.blogspot.com . I'll keep doin' that for a while among other stuff...

I have a tasty horror tale up at Thrillers, Killers 'n' Chillers. Warning it has disturbed a few people so please read with caution.

Stop by LVA to participate.

Did a review of Jack Ketchum's Cover, and plan to catch up on the second season of Walking Dead, and give a little writey upy.

Please 'Like' my enter for it to go through to the finals!!!
Thank you!

Adam Baker, author of the critically-acclaimed OUTPOST is back with a new novel named JUGGERNAUT.

Mercenaries, soldiers, the Iraqi desert, the search for Saddam's gold, and the discovery of a an evil that would not die.

The novel, Ark Of The Witch, is available now on Smashwords and I'm looking for some reviews. We're currently on the last lap of post production for the feature film, Ark Of The Witch, starring Tiffany Shepis, from which the original novella was based on.

Thank you for your time and consideration,

Ailing from a bitter divorce settlement, the foreclosure on his home, and the loss of his job, Karl's just received the break he's been waiting for. He's inherited the family farm in northern Michigan, but first he must confront an ex-business partner in an attempt to cover up his misappropriations and the shoddy business practices that have come back to haunt him.

In the sleepy town of Toivola, Michigan, Karl's brief respite is soon shattered by the dire need of his cousin, Maki, and a menacing town sheriff. Resigned to his fate, Karl leaves nothing to chance, save but one tiny heirloom that has beset his family for generations.

All the fun of the fair, or should you have kept your children safe inside? Flash at The Futurist.

A Never Ending Tale of Magpie's. Update about the anthology with a sample from the book and video trailer. Thanks.