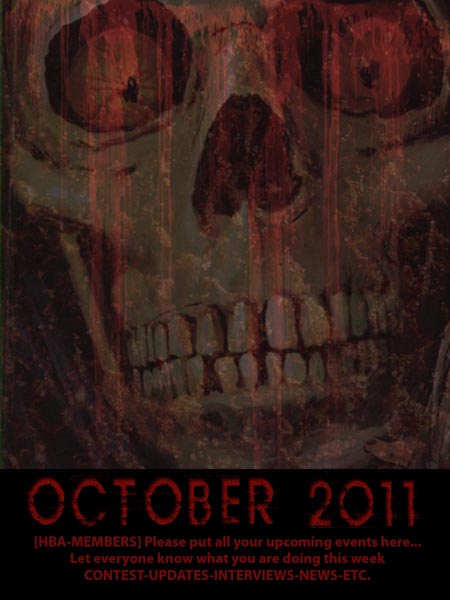 After three years in a row, I'm taking a break from "31 Nights of Halloween," although there may well end up being a post each and every day at the Terror Titans blog anyway.

At the VERY least, there will be the "Countdown to Halloween with Vampirella" series with a portrait of the Queen of Halloween appearing on even days at the Terror Titans blog and on odd days at the Shades of Gray blog. Additionally, the regular series at SoG will be given over to Halloween themes and monsters. (Yes, even the Space Girls will be faced by fearsome creatures of the night!)

Hello! HBA and iZombie...
As The 31 Days Of Halloween Countdown Begin I Plan To Take a Look at actor Vincent Price "The Abominable Dr. Phibes" Memorabilia here on my blog: Who Is Afraid Of Miss Lovett, No! Mrs. Lovett and Over There on my Film Noir Ning
I plan to take an Up-close and personal view too...Of the memorabilia.

I also plan to link back to horror websites that I visit daily too!
Thanks,
deedee :-O

I will be doing the 31 baddest days of Halloween: COUNTDOWN TO INSANITY! Follow along as I watch 31 of the worst movies ever made.

I am doing a broader month of posts, either Halloween or horror related. Hopefully. :)

Happy Halloween to everyone!

This week I will be getting more Halloween Projects completed. Putting some DIY posts up and doing a few haunt reviews as well as interviewing some of the better decorated yard haunts in my community.
Lots of good posts planned as the countdown to the most wicKED night of the year closes in!

All October long, Macabre Republic (www.macabre-republic.com) is celebrating Ray Bradbury Month (the author's dark-carnival and Halloween works will form the subject of each day's post). The Month kicks off today with a Bradbury-themed trivia quiz.

Who Is Afraid Of Miss Lovett? No! Mrs. Lovett... and Over There on my Film Noir Ning...

Taking a Closer look at actor Vincent Price in "The Abominable Dr.Phibes" memorabilia

Now, I'm Off to visit other blogs and link back to them too!
Thanks,
deedee ;-D

Rise and Fight just wrapped its first film shoot! Head over to www.riseandfight.net to see some behind the scenes pics and follow us to know when we wrap post production and launch. Lots of zombies!

The Zombiethon 2011 is coming. Last year's event was pretty fun, and this one promises to spread the virus and good times.

This month at Nightmare Castle Blogspot I will be doing a countdown of my all time favorite monsters starting with Frankenstein. Also I will have a review up of the Syfy Channel movie MORLOCKS;were I am going to discuss how it actually fits in with the TIME MACHINE. Of course there is also going to be various reviews of Horror movies such as FRANKENSTEIN MUST BE DESTROYED,THE VAMPIRE BAT,THE APE MAN, plus many more.

Well, my OPG is up and running. Stop on by, as things will get more interesting as the month progresses!

New review is up and this time it's for BEDTIME FOR TIMMY. Just follow the link to In The Mouth Of Madness!

Still got my goth sharks on the first page, but I'm also starting fresh with horror movie news, and I've added a new reviews category in the drop down bar for your viewing convenience.

This month, I continue my series about The Victims of Jack the Ripper. So far, I'm two parts into the trilogy.

I also posted a poll for the annual Halloween reading. I have narrowed it down to four stories. The winner will be read by me for the Halloween episode.

Make sure to either vote on the poll, or email me at: nightmarefuelpodcast@gmail.com

The schedule for this month is as follows.

I hope you all enjoy this month's bill of fare.
http://nightmarefuelpodcast.blogspot.com

Massive content updates every day. Massive postings of free "monster rock" every other day and a countdown of 31 must watch Halloween themed horror films until the end of October. Stop on by and check us out!

We've got five Halloween stories debuting this month on Scary True.
The first one, "Night of the Melon Heads," is already up. Next week is the legend of "The Corn Witch" followed by a scary tale of trick-or-treating, "The Impostor." Then it's the Midnighters in "The Midnighters: All Hallows" and on Halloween we have the story of a boy and his pumpkin and an unspeakable evil in "The Ghost of Halloween." Thanks!

Hi! HBA members and iZombie...
Here goes a new link to where all my posting will be posted...temporarily.
Today I'm looking at "The Son Of Frankenstein" Memorabilia...
...and from now on I will be looking at memorabilia every other day.

Here Goes...
Frankie's Memorabilia On My Ning
I will also be linking back to horror blogs that I visit every other day.

Therefore, tomorrow I will be linking back to websites that I visited and Thursday back to look at memorabilia and then on Friday...Well, you get the picture...
Thanks,
deedee ;-D

New review is up. This time it's for
the short Microcinema. You can find it In The Mouth Of Madness. Stop on by and comments are always welcome.

I'm trying for 15 posts this month, as Starkwell and Lovelock continue to talk their way through my quest for the perfect movie.

Review for the amazing The Woman is now up. Just go to In The Mouth Of Madness and comments are always welcome.

Reviews up for South Of Heaven and ABCs of Death entry T Is For Trick. Check 'em out, and comments are always nice.

I have a movie review blog now that is updated daily. This month is all horror films. Please stop by and have a look.

Feedback would be appreciated

Review for the short film DEUS IRAE is up over at In The Mouth Of Madness. Stop on by and comments are always welcome.

This month I am reviewing 31 decidedly non-horror movies for Halloween; starting off with MEAN GIRLS and ENCHANTED.

Please come along, comment, join in - and above all, suggest movies for me to watch and review for the event. The worse and more girly the better.

Do you wear those funky Zombie Hunter Patches? I don't. Find out why its important to be a discreet survivalist.

I never do anything terribly special for October since every month is horror-centric. Plus, my site is all about being random anyway. Movies I hope to review this month (subject to change)...

As per usual, I'll also be covering wrestling, comic books, music and more.

Review for Attack the Block is now up over at In The Mouth Of Madness. Stop on by, and comments are always welcome!

Halloween is just around the corner! Do you know what can turn your brain into mush aside from a zombie bite?

I'd say lead, cadmium, and mercury that could be found on your kid's costumes and props!

Protect your kid's brains from zeds and bad chems.

Review for Hellsing OVA 5 is now up over at In The Mouth Of Madness.

For the month of October, I am listing several horror movie moments that are favorites of mine. Feel free to come by and comment and add your input. :-D

Great news. My entry to the 'Mammoth Book of Best New Horror' competition at Lily Childs Feardom was chosen as the winning story.

Check out the details and read 'The Endless Game' at the link below. All comments and feedback are welcome.

Review for The Dead is now up over at In The Mouth Of Madness! Stop on by, and comments are always welcome!

This month at Disturbing Films (www.disturbingfilms.com), we are counting down to Halloween, by reviewing the eight films from the original series; yes, we included 'Season of the Witch!'

Come by and let us know what you think!

My story, The End of Humanity, read by Wayne June is up, which is super awesome. He put in voice effects and everything!
Also, at some point this week going to add a Not Bad for a Human, Lance Henriksen autobiography review. Probably tomorrow.

Doing a huge countdown of audio books and movies. Trying to film new episodes of my show. Thats about it.

Wow, you has a great blog. I'm very interesting to stop here.
Dont forget to give us your comment into my blog ya. Thanks for share.

I think Prasetyo is a zombie :-P


The great panic. It will kill you just as dead. Learn how to fight fear with preparation.

Get home alive to save your family when the opening phase of the zombie apocalypse begins.

Happy Halloween, everyone! Have a safe Samhain!

One of the information on posting related movie events.