HBA Nominated for a Movie 411 Award 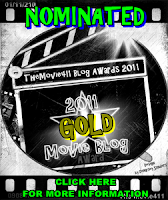 Call out to ALL "HBA MEMBERS" this is the time to vote, vote now...
Please Stop By... and cast your vote for the GOLD site of the year and see many other of your favorites HBA Members that are in some of the best of the best.
Click Here:
http://411movienews.blogspot.com/p/themovie411-blog-awards-2011.html
Show your support...
Posted by Jeremy [Retro]

I am an American man, and I have decided to boycott American women. In a nutshell, American women are the most likely to cheat on you, to divorce you, to get fat, to steal half of your money in the divorce courts, don't know how to cook or clean, don't want to have children, etc. Therefore, what intelligent man would want to get involved with American women?

American women are generally immature, selfish, extremely arrogant and self-centered, mentally unstable, irresponsible, and highly unchaste. The behavior of most American women is utterly disgusting, to say the least.

Tens of millions of American men have had their lives completely destroyed by American women through the following crimes:

3. Financial destruction of men in divorce courts through alimony and support payments (women get up to 95 percent of their ex-husband's income and savings, as well as the house, car, etc)

4. Emotional destruction of men by ex-wives who have stolen their children from them and forbidden contact

5. Divorced dads who commit suicide as a result

Not one single American woman has EVER condemned their fellow American women for committing these crimes against men. Silence means consent. Therefore, American women support and enjoy destroying men's lives and causing men to commit suicide. Apparently, American women think it is okay to be a criminal, just as long as you are a woman. Therefore, is it any surprise that a huge percent of American men no longer want anything to do with American women, other than using them for easy sex and then throwing them away?

Over 50 percent of American women are single, without a boyfriend or husband; so the fact is most American men no longer want to marry American women. Let these worthless American women grow old living alone with their 10 cats.

BRAND NEW: Buy the Boycott American Women book. After reading this book, I promise you that you will never even think about dating an American woman ever again, or else I will give you your money back. That’s right, if you are not convinced by my book, I will give you a full refund!