FROM OUR SPONSORS: Howlin' Wolf Records Releases "SHOCK WAVES and "THE TOY SOLDIERS"... 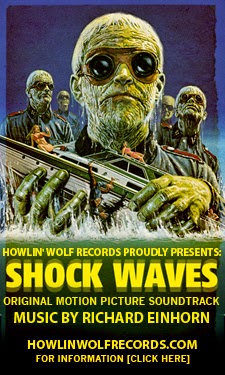 Shock Waves [1977]: proved to be a film of several firsts. It was the first of the "Nazi zombie" films which has entered and stayed in the pop-culture mainstream, firmly establishing itself as a fan favorite since its premiere. It opened up the territory for other Nazi zombie pictures , including Zombie Lake (1981), The Treasure of the Living Dead (1982, also known as Oasis of the Zombies), Hard Rock Zombies (1985), Horrors of War (2006, aka Zombies of War), Outpost (2008) and Dead Snow (2009), not to forget the highly-popular manga and its spin-off anime, Hellsing (1997-2009).


First feature for director Ken Wiederhorn, as well as composer Richard Einhorn. Wiederhorn's thesis film at Columbia University, Manhattan Melody (1973), had previously won the Student Academy Award for Best Dramatic Film in its inaugural year. Shot on a shoestring budget, with the gracious participation of two film heavyweights in Peter Cushing and John Carradine, It proved that one didn't over-the-top effects or technical perfection to create a movie of chilling psychological horror. 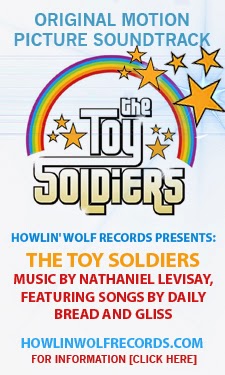 On one evening in a decade of sex, drugs and rock 'n' roll, the innocence of youth and family unravels. Five parallel coming-of-age stories dramatize the stages of grief. A youthful mother in a custody battle over her children, finds tranquility with the bottle. The abuse of her ex-husband still haunts the children; a nineteen year old drug addict, and his younger brother, a bullied closet homosexual.There's the story of the dog; a teen who offers sexual favors to gain acceptance, the challenged classmate who would do anything for her love, and the redhead beauty, haunted by a secret, tragic past. These lives and others will change forever on this final evening before their hangout, The Toy Soldiers Roller Rink, closes its doors for the final time.

Just Announced! For more information on these two releases, please visit "HOWLIN' WOLF RECORDS".  One is a classic horror film "SHOCK WAVES" released in 1977 and the other is "THE TOY SOLDIERS" a current film.
Jeremy [HBA Curator]
Posted by Jeremy [Retro]