The HBA Takes A Stab At: Resident Evil: Afterlife! 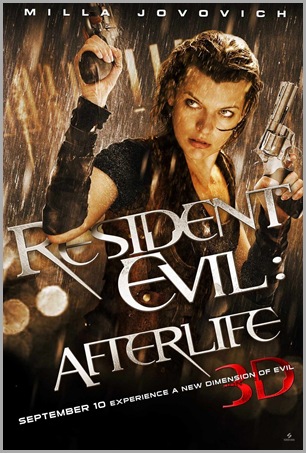 And here we are again with yet another weekend genre release, but this time around it is not a remake, it's not a shaky cam film nor is it even a movie influenced by a trailer. Instead, we get a sequel. I of course am talking about the latest installment in the successful Resident Evil series, Resident Evil: Afterlife. It's kind of funny that this one should come out just after we had a random question concerning franchises that people dislike, and it's even more funny that no one had even mentioned the RE series as it is one that certainly divides the general horror census. Personally, I find the series to be pure B-Movie fun, but will I think the same about this newest 3D edition?! Better yet, who cares what I think, let's hear your thoughts on this fourth installment, shall we? Watch the film, write the review and send it in to horrorbloggeralliance (@) hotmail (.) com or leave it in the comments down below and we will all dance a dance of true happiness afterwards.


Guardians of the Genre!: RESIDENT EVIL: AFTERLIFE AN ADDED DIMENSION BRINGS ADDED LIFE! or 3D AND ME!

Email ThisBlogThis!Share to TwitterShare to FacebookShare to Pinterest
Labels: HBA Takes a Stab at...

Word to that, Nicole. I have been in love with her since she uttered the words 'auto wash' in The Fifth Element!

hopefully they will make up for the lost story of the third film... and agree 100% mila is a hot lady...

I went to a theater that supposedly was showing it both in 2D and 3D. Turned out both auditoriums were showing it in 3D. I ended up with my usual mild headache, but overall I thought the 3D was very effectively used. I still don't like the gimmick, even if it didn't give me headaches.

With that said, I think this is the best entry in the series since the first one. My review can be read at Terror Titans. I gave it 8/10 Stars.

It starts strong, and it ends strong, but in between is way more talking then their should be, for a movie in 3d, about a video game.
For fans of rip offs of the matrix, and zombies with mouths that rip open. Also for fans of extremely excessive slow motion.

The video gamer fans will still hate this, even if they have already stated they will do the 5th with more fan input. I love the series but im not a gamer fan. The 4th, although many plot holes had excellent 3D effects, probably the best I have seen in a movie for a long time. And theres plenty of good action scenes, Milla still shines as Alice. Over all, another guilty pleasure!

I thought RE: Afterlife was wicked cool! You can read my full review at http://guardiansofthegenre.blogspot.com/2010/09/resident-evil-afterlife-added-dimension.html.

When i grow up i want to be just like Milla! I don't want to be a doctor, or a lawyer or anything else. Just to Save mankind and kill man eating zombies for a living. Great movie, I love you Milla!