The HBA Takes A Stab At: Piranha 3D! 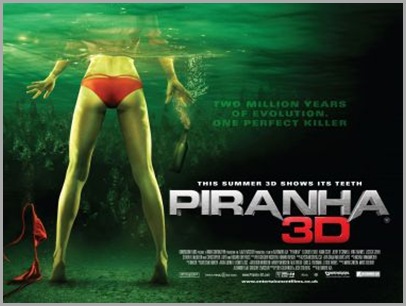 Just when you thought it was safe to go back to the movies, this Friday brings us the long awaited release of Alexandre Aja's Piranha 3D. It seems like it's been forever since this remake was first announced, in fact, this three dimensional film was in the works before said dimension would become the hottest thing since chipotle. With the campy aspect being a difficult one to pull off, I am quite eager to see how fans react to this one…I can only imagine the average moviegoer is going to think "it's sooo stoopid!," but who cares about what they think, right?! Right! Now, if YOU want to share your opinion with the rest of the awesome members of the HBA, just drop us an email at horrorbloggeralliance (@) hotmail (.) com, or leave us a comment below with a link to your review, and we will be sure to post it here for everyone to see!


The Horror Effect: Piranha 3D (2010) There's more to cheese than blood and boobs


Dinner With Max Jenke: The Piranha And The Damage Done
Posted by Matt-suzaka

I got out of the theater about an hour ago. Here's my general feeling...

More for the fire.

Thanks, Becky and Mama, I added both of your reviews!

OK here goes - here is the vote from the Cyberschizoid jury!

Just added it, and I must say, that is a fabulous tittie...err...I mean "title" you came up with!

Here is my review!

Here's another review to add to the pile: