Horror Debates: Should The Infected Be Considered Zombies? 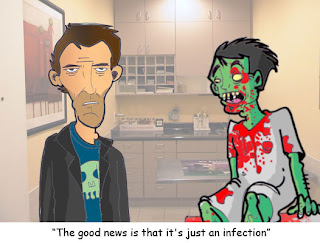 Modern Horror has been a cause for much debate with the evolving nature and terminology of the classic zombies. Today's debate focuses on the recent trend in the fast-moving undead which have recently taken on the title "The Infected." L. Cass from Zen and the Art of Zombies has posed a striking argument in favor of The Infected joining our zombie brethren under one giant undead umbrella, while Elwood Jones of From the Depths of DVD Hell has countered with a strong case for why the two should be considered separate factions in the ongoing war against the living:

Should "The Infected" Be Considered Zombies?

Definitions of zombie on the Web:

Let’s forget about the fruit juice for now.

Asking whether the infected can be considered zombies in the traditional sense, as in a dead body that has been brought back to life by supernatural forces, then the definition does not fit at all.

In fact classifying zombies to the exact definition of the word, would make our zombie movie lists very short.

In ‘Night of the living dead’ fresh corpses rise up to consume the living, but these corpses were believed to be brought back by radiation, and not Voodoo or the supernatural.

So ‘Night of the living dead’ doesn’t have zombies?

A lot of words gain a broader and sometimes all together different definition when they partake to a particular subject, as in this case to zombie movies.

In a sense the horror movie zombie relates to the 3rd definition of the word i.e.

Though the Zombies in “Night of the living Dead” were initially risen corpses, the zombie disease itself is spread to new victims through bites. The components inside the zombie that cause them to rise from the dead are passed on through the saliva and blood in these bites, similar to how some known infections are actually spread. The bite sometimes acts to even accelerate the body towards death, then reanimating the corpse. Making the time spent alive after the bite, an incubation period of sorts.

The infection in ‘28 Days later’ is spread exactly the same way, except the Rage Virus doesn’t wait for the body to die before it takes effect. Also unlike the ‘Living dead’ zombies that seek living flesh, those infected with rage have but one primal instinct and that is to kill everything that is not them.

When it comes to it, what defines a zombie, regardless if it’s the "28 days later" type, or the more traditional "Of the Dead" type, is that the body lacks the higher functions of the brain (emotion, thinkings, facebook abilities) and rather concentrates on extracting your guts out as painfully as possible

As zombie movies evolve, so do the trends associated with them. In the early days of zombie cinema, there was a strong fascination with the occult. Most of the dead were forms of ancient evil or voodoo monsters, seeking to destroy the living. As the atomic age dawned, we were introduced to zombies that are brought forth by radiation.

In this genetically enhanced world, the infected are the latest trend of horror innovation, and have every right to be considered zombies.

“The Infected” should not be considered to be zombies, even though they rightfully belong in the same sub-genre as their zombie brethren. Bizarre thinking I know but please allow me to explain.

Zombies are the re-animated bodies of the dead, which straightaway eliminates the infected, from being considered zombies due to the key fact that they are not actually dead, were as the infected are still alive, driven into a frenzy by the disease they carry, breaking them down mentally to the most primal of instincts, which as a result means that they share several of the same qualities as Zombies.

The infected being comparable to zombies, really came to the forefront, thanks to Danny Boyle’s “28 Days Later” which despite being marketed as a Viral thriller, thanks to horror at the time being a dirty word, was truly a zombie movie, with Boyle in various interviews comparing it to the essential zombie movie “Night of the Living Dead” while stating that zombies were just easy too to escape due to their shuffling nature, while making it kind of clear that he’d never seen “Return of the Living Dead” which was the first film to feature running zombies (as well as the lust for brains).

It could be argued that the term “The Infected” could also be applied to Zombies, seeing how the zombie infection is passed, though being bitten / scratched by a zombie, but it is only after death induced by the virus that someone actually becomes a zombie, were as with the infected the result is almost immediate, with victims being turned into frenzied beasts often within seconds. This infection also works the two very differently, with the zombie virus taking control of key parts of the brain to stimulate movements in the limbs, while pushing the zombie to continually feed and seek out a food source, where as the various viruses which create the infected, as I stated already breakdown the human mindset to it’s most primal instincts, via way of creating a chemical imbalance in the brain with one of the most obvious differences being a overwhelming desire for violence with a lack of desire to feed on flesh, meaning that if isolated they will starve to death in a few months, were as zombies can continue to live without needing to feed.

The other main difference between the two is the method of dispatching, with the infected easily killed with any large amount of trauma, caused to their bodies, while zombies can only be stopped by destroying the brain.

Still though they might not be zombies, I’d still consider the infected as being part of the same genre, in much the same way as the early zombies seen in films such as “White Zombie” which were seen as slaves doing their masters bidding, with Romero and Fulci turning them into the flesh eating horrors, most recognisable and in a way it could be seen that the infected are merely the next evolution of the zombie mythos, even though elitists will always wish to mark a line between the two groups.

Excellent arguments gentlemen, thanks again for your contributions! Now is your chance to chime in on the debate, be sure to leave your thoughts and opinions in the comments below, and stop by Zen and the Art of Zombies as well as From the Depths of DVD Hell to check out L.Cass and Elwood's fantastic blogs!

Are we just splitting hairs here? :P Great arguments on both sides.

I agree with Cass. I don't think as zombie fans we should exclude the infected. After the virus takes over, their brain dies anyways, so technically they are dead. They can't be cured, at least not to my recollection. They are just as scary, if not more, than the slow moving dead, who cares how they got there. Good argument though. Nice work!

Kudos to my opponent on another great debate. As for a cure for the infected it was hinted at in "28 days later" that it could be calmed by bombarding the infected with images of violence and chaos. I know in the original script that Jim actually swaps blood with the infected Frank curing him, while infecting himself. The idea was dropped when it was realised how far fetched it was.
Still the infected are basically just another form of Zombies at the end of the day, while proving what a milestone in modern horror "28 days later" was.

Cheers to you to Elwood Jones... this debate was a lot of fun.

You should see the one's my mates and I have over beers. One time a friend of mine and I went nuts over who we thought was better: coldplay or Oasis. lol I was for Oasis...

We almost got into a huge fight over it.

I cant help but lump them all together myself, its all just semantics to me at the end of the day, and all that really matters is how many people they are going to kill and in what succession =D

..And Oasis will ALWAYS be better than Coldplay.

Too Many Zombies said...

I can't help noticing, going back to the earlier debate, that none of those definitions mention Olympic-level sprinting or ceiling-crawler. Which is nice.

I think there needs to be a new term. Perhaps zombie-ish. Or zombiesque.

Thing is, in spite of some very clear variations in zombie lore, this question wasn't an issue before the Dawn remake. It wasn't even an issue when 28 Days Later came out. Yes, we all saw the similarities to zombie movies and zombies were used as a point of reference but nobody really took the 28 Days infected as zombies.

Until Dawn '04 came along and sort of fecked it all up.

And you can say, sure, that zombie movies evolve. And they do. But the problem is that the waters are so muddied, nobody knows what is what any more and just about anything can be considered a zombie.

The Crazies was not a zombie movie. And yet the Crazies remake is. Simply because it came out in this time of confusion. And if 28 Days Later and the Crazies are zombie movies, what about that one with Dustin Hoffman? Suddenly medical movies are open to being interpreted as zombie movies.

Bava's Demons would be called Zombies if it were released today.

The definition is too vague right now. Personally, I think we need to be getting much more strict on the term if only so that we have some idea of what we're getting when we hear the word 'zombie'.

Yeah I see what you mean about the muddied water thing. I didn't consider "The Crazies" to be a zombie movie, but I can see why some people might.

But then, I didn't like how the way Romero's Zombies started thinking and reasoning since 'Land of the Dead' and even more so in his recent "Survival of the dead."

I guess it's kinda like what Elwood Said... that we need to have zombie sub-genres now.