The HBA Takes A Stab At: The Crazies 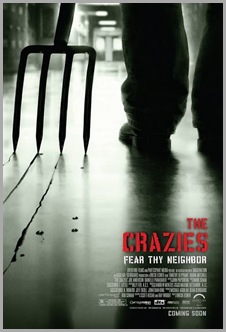 Wow, three weeks in a row we’ve had a big theatrical horror release, and early word on this week’s release of The Crazies has been very positive from what I’ve read thus far. It’s wonderful to see all of these horror films coming out, but it would be nice if they were spread out a little. Always fest or famine with the theatrical horror genre it seems. In any event, what’s your take on The Crazies? If and when you see and review the film on your blog, shoot us an email with the link to horrorbloggeralliance@hotmail.com or leave it in the comments section below, and we will be sure to post it for all to check out!
Planet of Terror:
The Crazies
Dinner With Max Jenke:
We All Go A Little Crazies Sometimes
The Horror Digest:
The Crazies: There Was a Mouse in the Movie Theater and No One Believed Me
Heart in a Jar:
Is this hell? No - it's Iowa
The Horror Effect:
The Crazies (2010): Me likes it
Posted by Matt-suzaka

It's currently 81% fresh on Rotten Tomatoes...a horror film critics like? It's the end of the world!

I'm going against my better judgment and seeing the midnight show of this in less than an hour. Shutter Island is sold out...grr!

Thats all Matt homeboy, theres four of us moderating the site so it can get tricky =D

Yo Matt, thanks for linking to my review! Hope you get a chance to see The Crazies on the big screen - I think you'll dig it. It's good stuff!

I haven't seen any of the new horror releases, but hopefully I can make it to a movie tomorrow night!

And yeah, I knew both Jeff and Cortez did reviews, so I just went and put them up since I knew they were already there. Figured you guys would be cool with it!

Just put up my review!http://horrordigest.blogspot.com/2010/02/crazies-there-was-mouse-in-movie.html

Good stuff for the most part!

Australia hasn't even been given a release date for this movie. I'm a little sad right now as I want to see this. Scuse me while I go cry into my Cthulu Dolls Shoulder.

I've been counting down the days until The Crazies release! I've only watched one trailer, months ago, and I haven't read any reviews, but I love me some Timothy Olyphant, especially when mixed with horror. Plus, Scott Kosar wrote it. Sadly, I don't get to see it until Sunday though.

From The Jar, Carl!

Blech! Everyone else is going to have a better review than me. And I'm friggin' late as hell. Anyway, here's me blabbin' about The Crazies.